Bloons TD 6 is another release of colorful and fun tower defense game developed by Ninja Kiwi in 2018. In the game, the player must build an effective defense and pop the title Bloons with the help of various monkey towers, numerous abilities, and unique heroes.

Bloons Tower Defense 6 features a pool of 21 monkeys, from which 2 are totally new and 9 heroes who will help us on our Bloons poping journey. It is worth to mention that each and every monkey offers 15 upgrades significantly modifying the gameplay. In addition to that, this time BTD 6 uses fully 3D objects that can block the line of sight and make much more essential. 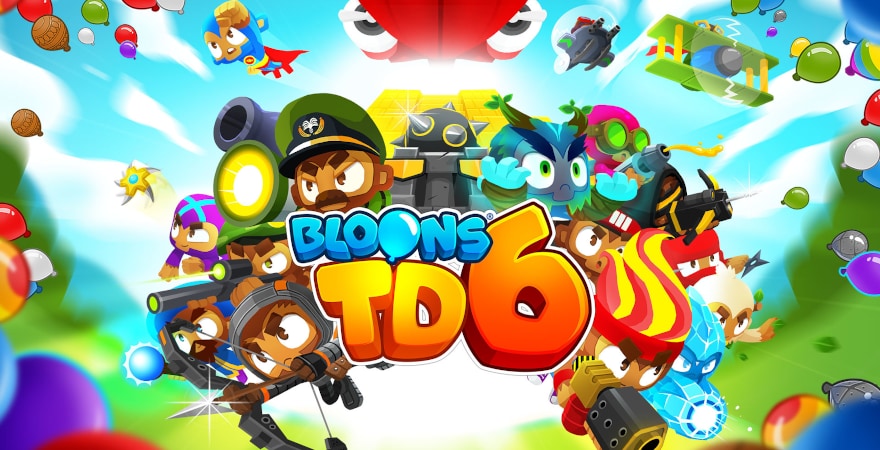 Overall, the main elements of the gameplay in Bloons TD 6 are similar to previous games of the series. However, the developers have prepared many new mechanics and introduced numerous changes in accordance to previous games such as new types of the Bloons. New Bloons have many different properties, for example, Purple Bloons will not be affected by fire, plasma or energy weapons and Fortified Bloons are, as the name may suggest, much more durable than the regular. The gameplay is being presented in a system of rounds. The game gets more challenging witch each round introducing more Bloons. Before the game begins, players may select difficulty level choosing from three available options – Easy, Medium, and Hard. After selecting the difficulty, players can choose a sub-mode. The multitude of various game modes makes the whole gameplay much more diverse than previous releases of the series.

Similarly like previous games of the BTD (Bloons Tower Defense) series, developers from Ninja Kiwi have managed to satisfy most of the players. According to the Steam platform the game received thousands of favorable reviews. Over 96% of the most recent players’ reviews are positive. Many players claim that BTD 6 is one of the best tower defense games on the market and its addictive gameplay offers uncounted hours of fun.