By: pcstorms
In: Blogs, Game News, News
With: 1 Comment 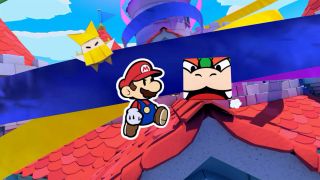 Paper Mario: The Origami King might not quite be the RPG that fans of The Thousand-Year Door were hoping for, but it’s still evolving the Paper Mario series in a way that should be celebrated. We’ve been through stickers, paint, and battle cards in past installments, and now we’re looking at origami. It’s a fun twist on the Paper Mario formula, especially as it introduces a villain so dastardly that even Bowser and Mario are forced to team up for this adventure. In light of everything that’s changing with Paper Mario: The Origami King, we got the opportunity to talk with some of the game’s developers to understand how it came to life.

“Setting the game up so the characters turned into origami also had their wills stolen by King Olly allowed us to position the paper versions of Bowser’s minions as allies in this instalment. The ideas of Mario’s arms folding and extending, and of Olivia re-folding herself into a Vellumental using a Magic Circle, were only possible because of this origami theme.”

“Setting the game up so the characters turned into origami also had their wills stolen by King Olly allowed us to position the paper versions of Bowser’s minions as allies in this instalment. The ideas of Mario’s arms folding and extending, and of Olivia re-folding herself into a Vellumental using a Magic Circle, were only possible because of this origami theme.”

“After this, I started thinking about the boss battles. It was a challenge to make the battles work using essentially the same system. There would only be one boss character, so there wouldn’t be any need to line enemies up. Instead, I thought of putting the boss at the centre of the board and having Mario able to attack once he makes his way to the centre. I drew concentric circles on a whiteboard and used some small magnets depicting arrows or icons to test the idea over and over with Ms. Tabata. Once I was sufficiently confident with the system, I proposed it to Intelligent Systems.” How interesting has it been to turn stationery into boss battles? Are there any that proved particularly complex to weaponise?

Masahiko Nagaya (director at Intelligent Systems): “For the stationery that appears in this title, we’ve chosen objects that everyone will have interacted with at some point in their lives. I suspect there are more than a few players out there who played make-believe with these objects during their childhoods.”

“When we were working out the battle plans for the different bosses, we started by going back to our childhoods to broaden our imagination and think about what sort of attacks the stationary would have, and where their weaknesses would be, based on their features or shapes. In that sense, the initial conceptual phase was a lot of fun with all the different stationery. However, when it actually came time to implement the designs, they all posed different challenges because each of their attacks were completely unique.”

peaking of attacks, the 1000-Fold Arms are an ability that works both inside and outside of battle. Did these take direct inspiration from Arms?

Nagaya: “The 1,000-Fold Arms system came up while we were exploring whether it would be possible to use the features of the Nintendo Switch to reproduce the sensations from Mario’s hands in the player’s own hands; we didn’t have any existing games in mind during the conception phase for this system.”

“One of Mario’s abilities unique to this title is that Mario can throw confetti around the overworld to repair objects or terrain destroyed by enemies. This system is intimately connected to the adventure elements of the game and could definitely be stated as one the key systems in Paper Mario: The Origami King.” The Origami King may not be drawing inspiration from Arms, but it still feels like a celebration of Super Mario lore generally. Let’s talk about that giant Metroid helmet.

R. Tabata: “One of the things Intelligent Systems wanted to do with the papier-mâché idea was to have Mario wear papier-mâché masks to disguise himself as something. As that sounded like an interesting idea, we prepared a certain event using it. It wouldn’t be much fun though if we only offered the correct papier-mâché mask. We felt players would want to try on a variety of masks if they were given the opportunity, and so out of that idea came the Space Warrior Mask. As for what happens when you put it on… I think it’s best you actually try it and see for yourselves!

“Also, just to mention, this isn’t the only mask, so I hope you’ll look forward to the others too!” It’s so lovely to see that The Origami King continues the series’ trend of dialling in on humour. A lot of the humour comes through in your interactions with NPCs in the world and the companions that will follow you on your journey, so how did you approach that with regards to returning favourites and new characters like Olivia?

Tanabe: “From the production of Paper Mario: Sticker Star onwards, we were no longer able to graphically represent individual characteristics, such as age, gender etc., in the Toad NPCs (non-playable characters), and so it has become that much more important to convey their personalities simply through text. Our writer, Mr Taro Kudo, has been grappling with this difficult challenge since Paper Mario: Sticker Star, but has managed to achieve giving all the texts a sense of humour. In this instalment, Paper Mario: The Origami King, we were able to include some Toads wearing an outfit to match their role, and also created original origami characters.”

“For the personality of Mario’s travelling companion, Olivia, we were aiming for a particular style. The majority of navigator characters are always smart and guide players as if they were teachers. This means these characters are prone to all have the same kind of personality. What we wanted to do in Paper Mario: The Origami King was to come up with a female character who is somewhat easy-going and charming in their own cheeky way.””Personally, I modelled her on a certain Japanese actress and so I asked Mr Kudo to write her text with that in mind. During the early stages of development, it was a lot of effort for Mr Kudo, but by the end it was almost as if Olivia was writing her own lines! I’m confident she’s turned out to be a really charming character.” Charm is definitely a theme of the game! I love the fact that there’s been some fun had with the placement of the Toads too, the ones that have been trapped in different locations across the world. Was it always your plan to include collectibles? How will finding all the Toads change the game?

Tanabe: “Personally, I don’t think that collectables are absolutely required in all games. However, in the kinds of games where players explore overworlds, I believe that hiding things in suspicious looking places —in order to meet player expectations— and having players find these, is important in the sense of increasing the density of the game overall. That’s why we’ve prepared Collectible Treasures and Toads in Paper Mario: The Origami King. However, we didn’t include the Toads simply to increase the game’s density.”

“First, we needed to start by creating a situation where there are no Toads around so that we can bring out the eeriness of the town in the beginning of the game. Features that help the player, like shops or the battle-practice area, start to become available based on the role of the Toads that the players save, so the town will slowly come back to life. As this more or less corresponds to the player’s progress rate, not only can players visually see the progress they’ve made, they can also feel it as part of the gameplay.”

“The number of Toads that players rescue is also reflected in the number of spectators when battling. If you give coins to the Toads watching your battle, they’ll help you solve the puzzle or give you an item based on the amount of money you give them. Of course, the more spectators, the more powerful the support players can expect to receive. The Toads’ chit-chat from the spectator seats will also serve as hints for battles too, so I hope you’ll all try to rescue lots of them!”

Finding the Toads almost becomes a game in itself in Paper Mario: The Origami King. They’re practically hidden in every seam! But, there are plenty of mini-games in the game too. Were you always trying to make sure they tied into the origami theme?

Nagaya: “We imagined the flow of emotions that we wanted players to experience in each of the different scenes and then chose the best options to fit that flow. Mini-games were one such option. While the actual theme of origami didn’t prove to be an obstacle for mini-games, this series uses worlds built of paper, so we were careful to remain aware of whether our ideas were deviating from that concept, and whether their depiction looked like it fit with the world of paper. (That’s also the point we’re most careful with across the whole series, and not just the mini-games.) Speaking of the folded world, how fun has it been to turn classic characters into origami figures? Would there ever be a plan to release these as instructions so players can craft them themselves?

Nagaya: “It was incredibly exciting to create origami versions of characters from the Mario universe that are known by people around the world. When we were creating mock-ups using actual paper, we were really taken by the fact that despite their cuteness, the characters also had this peculiar charm where you could sense a vague eeriness about them. Having said that though, the characters we were basing our origami versions on had to be clearly identifiable, so in designing the origami versions we prioritised making sure that the individuality and features of the characters were properly expressed. In addition, we also made adjustments, even down to the smaller details, to make it so that they look folded and like origami.”

Did you ever consider changing Mario and Luigi into origami versions?

Tanabe: “As you can clearly see if you take a look at Princess Peach or the Goombas that appear in the early part of the game, the paper characters turned to origami by King Olly have all had their wills stolen by him. Due to this setup for the game, I personally didn’t think about turning Mario or Luigi into origami.”

2020-07-17
Previous Post: Ghost of Tsushima succeeds by finding space for quiet reflection in a world scarred by violence
Next Post: In a strange, formative summer, Sony plays the long game with PS5 – and leaves Microsoft room for a comeback with Xbox Series X