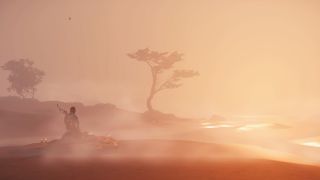 I didn’t expect to find myself searching for inspiration in Ghost of Tsushima. Hell, I didn’t think I’d find it either. The truth is, open-world games are rarely so cathartic. There’s a quiet and reflective nature to Ghost of Tsushima that’s difficult to turn away from; you’re as likely to spend time listening to whispers of the wind as you are a blood-curdling scream from a vanquished foe. Ghost of Tsushima is an action-adventure with a sanguine spirit.

The Mongols are invading, you say? I’ll consider that while writing a Haiku at the riverfront. My uncle has been captured? Leave me be, I must reflect on my family legacy while soaking in a hot spring. A village is in need of protection? I’ll get to it eventually, but first I must follow this fox on an adventure into the vibrant wilds. Ghost of Tsushima is a lot of things, but it’s a love letter to the calming quality of nature above everything else. “You know, oftentimes as a developer, you think ‘what are the things that the player can do in the world?’ And sure, that’s fine, but I think we also have to consider how we want you to feel when you’re doing them,” says Jason Connell, creative and art director at Sucker Punch Productions. “The Haiku is a great example. There’s a huge difference between going to do something because you’re really in love with the beauty of it or you’re just having a moment, versus, say, if we made it a main axis of progression.”

That statement gets to the core of Ghost of Tsushima’s finest accomplishment. In an era where open-world games can so often feel like busywork – where the impulse to explore isn’t driven by curiosity, but rather a need to clear the map of markers – Ghost of Tsushima feels like a quiet revolution.

“If we said, you know, this is how you level up or this is how you get more health – if an activity is tied to something really critical or vital – then the desire to do it is very different. The feeling you get at the end would be very different. It’s not like you have to do 15 of the Haikus to level up. You’ll get a headband, which is cool, and maybe you’ll remember the moment,” says Connell. “I’m actually really glad that they are these bespoke moments that you can engage with on your own terms.” The story and side-quests are largely oriented towards liberating Tsushima island, though there is plenty to see if you’re willing to venture away from the golden path. Many of the game’s best moments are entirely optional. Points of interest to be stumbled upon, activities that offer no tangible reward outside of the experience of locating it. As game worlds continue to get larger, and as the pressure on developers to fill these burgeoning worlds with content becomes tangible, it feels liberating to move through a space that isn’t desperate or demanding of your attention.

An open-world game that gives you space to think and time to breathe in the air? It isn’t as easy to engineer as you might imagine. “It is not an easy decision, because a part of these big open-world games is trying everything back into progression. There’s a larger conversation about the style of systems and progression you have, but it’s very hard to say, ‘hey, we’re going to take this content and this content over here and we’re going to say you don’t have to do it.’ And that, I think, is why somebody will love it versus being told they have to do it,” says Connell, adding, “Our philosophy has grown over time but that’s kind of the way we look at it… seek and enjoy it, if you will.” The decision to push back against waypoint hunting is one of the smartest Sucker Punch made with Ghost of Tsushima. The limited UI, the navigation systems driven by nature, and a world populated with calming objectives ultimately feeds back into this feeling that you can always just, as Connell puts it, “take a moment to chill. It’s okay to just breathe a little. You don’t have to rush off to kill the next thing and drink the story in at 100 million miles an hour. It’s okay to go do some photo mode. It’s okay to go do a Haiku. It’s okay to just wander around the world and see what you find.”

I’ve invested a lot of time into Ghost of Tsushima, but the island is no closer to being free of the Mongols than it was when Jin Sakai first vowed revenge on Khotun Khan. I’ve just been exploring, letting my senses guide me through this gorgeous world Sucker Punch has created – it’s undoubtedly one of the most vibrant open worlds engineered this generation. There’s something to be said of the calming nature of organic discovery. I’m finding shrines and spots to sit a while, looking for the best locations to leverage the, frankly, ridiculous fluid-motion photo mode. I’m having fun doing nothing at all.

Speaking with Connell, I get the sense that pushing for this type of expressly optional content – activities that don’t tie into character progression or building sculpted areas of the map that have limited impact on the story – is difficult. Video games are expensive to make and take a hell of a lot of time to engineer; Ghost of Tsushima has been in development in one capacity or another for six years and there are budgets to think of. But there’s also a human angle to consider too. “We’re all creators, you know. Whether you’re directing, or you’re creating a mission, or you’re making some artwork – nobody wants their stuff to be optional, right? Everybody wants their piece of work, their contribution to this game, that they have spent their life and their energy on, to be mainline,” considers Connell. “I think it’s been important for our team – and I think that we’re getting better at this philosophy – for us to try and say, ‘Hey, you know what, it’s okay if the stuff that we’re working on is optional, based off the view that ‘optional’ means a player wouldn’t have to do it to complete the main story. There’s actually significant beauty in that point of view, and it actually had a super meaningful impact on our team, on the game at large, and hopefully to our players too.”

What Sucker Punch understood early on is that it needed to take a broader view of what it means to “complete” a game. The studio needed to step back from the idea that every system, mechanic, and piece of content would need to serve some combination of the story, the characters, and even the way the game plays. Instead, what happens if you pull the lens back a little and just focus on the world? The way it feels to walk through it? To inhabit it, and to breathe in its air. That’s where Ghost of Tsushima succeeds, in its capacity to be a calming presence in an otherwise chaotic world.

“I think there’s this stigma that games are beaten by doing the story, but games mean very different things to different people. Some people love completing a story, but others just want to jump in and explore, or play around in photo mode. I mean, I’ve played 300 hours of Skyrim and I don’t know that I’ve beaten the story – and that’s one of my favourite games,” Connell laughs as we finish up our chat on this hyper-chill open world. “There’s just so many different types of joy that games can bring to people.”