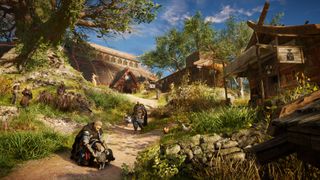 Spare a thought for the developers responsible for building the world of Assassin’s Creed Valhalla. Instead of research trips to Egypt or the sunny beaches of Greece, the team behind the latest installment found themselves at an Anglo Saxon museum in the UK’s East Anglia.

“The director of the museum dressed up in a Saxon outfit in the middle of the night, under the stars and a campfire, and she recited the entire of Beowulf to us,” says Darby McDevitt, narrative director on Assassin’s Creed Valhalla. “We just got that feeling of what does that feel like when there’s no electricity, just a campfire, and a storyteller? So we do a lot of that kind of thing. We try to immerse ourselves in everything and then hopefully we can dump it into the game.” He adds that the team also leaned on Ubisoft’s British employees to learn about its local history, myths, and legends, alongside the usual historical texts. Assassin’s Creed Valhalla does, after all, base itself in the Dark Ages, a time not known for its meticulous record-keeping. “I mean, there’s the Anglo Saxon Chronicle, which is very terse and is obviously written for very political purposes. Just to make [King] Alfred and his kids look good,” explains McDevitt, who even found himself reading books about recent excavations and the archeological applications of soil density testing. “But those books are not written by people with very thrilling prose.”

Instead, the team used these historical references as a skeleton on which to build its version of Anglo Saxon England. “Where you have minimal sources, you just have maximal imagination,” he says. “So it is historically a dark age but there’s enough to go on that you can fill in the gaps pretty easily.”

The Norse side of things helped too, with the Viking’s Icelandic sagas – specifically Njáls saga, actually overlapping with English history. “He actually roams around England just a few decades after our time period with a lot of details. So the sagas are known for exaggerating a lot of things, but they still give you a great window into how people thought and how people behaved in the kind of problems that were happening.” The Norse may be remembered in popular culture for their prowess in combat, but there’s far more to it than that for Ubisoft Montreal. Norse mythology is fascinating, and it’s a key building block to the world-building of Assassin’s Creed Valhalla. These aren’t just campfire stories, it reflects a way of life. “This game will represent the Norse mythology in terms of it being a living religion for the people who believe in it,” continues McDevitt.

While this will present itself through Valhalla in a number of ways, one will be through the repeated motif of cursed symbols – those glowing marks you may have glimpsed in the Ubisoft Forward gameplay demo. These are key to the narrative and walk a careful line between magic and Assassin’s Creed’s science-fiction sensibilities. “We had this idea of a backstory of some Saxons, who are so desperate to get the Norse and the Danes out of England that they’ve hung up these cursed symbols all over England.”

“When Eivor gets close to them, the screen darkens and music and a mysterious sound effect happens. There’s kind of an uncomfortable feeling and that area is affected and until you find and destroy that cursed symbol, it will remain,” McDevitt explains, noting that this is just one of the studio’s attempts to draw us into the lived Norse experience. “That’s not actually it’s not magic happening. What we’re doing is we’re trying to represent how Eivor feels. This character actually believes in these curses, and believes it’s affecting them, and so that’s kind of how we want to represent Norse mythology.” “For people who’ve been with us for a long time, the ancient pagan gods like Minerva and Juno and Jupiter, they were represented as this first civilization,” he says. “They weren’t actually gods. And I think players who are going to come into Valhalla can expect that it’s similar to how we treat the Norse Pantheon as well. I don’t think you’d be led astray if you started Assassin’s Creed Valhalla opens with Eivor leading their clan from the icy desolation of Norway and towards the shores of ninth-century England. This framing – along with the history of the Vikings themselves – led to changes to the structure of this year’s Assassin’s Creed. One prominent example is that of the settlement, a new home for your clan that will grow and expand over time reflecting your success and failures in the world.

“We’re Viking, we’re in England, so we have a settlement that feels a bit like a family that you try to grow to protect. That organically led us to a different narrative and game structure, where it’s more about a core storyline around the settlement,” explains Marc-Antoine Pietri, lead systems designer, who is keen to stress that the team wanted the Viking experience to be represented through more than just combat. “Around that, you’re going to be brought to other territories that you can take on in any order you want. That’s going to give you opportunities to forge alliances and stuff like that..”

While raids may be one of the starring features of Assassin’s Creed Valhalla – broad battles on an epic scale that’ll truly test your prowess in combat – it might not be the most interesting element of the game. The strength of your clan will be impacted by what’s going on at the homestead, and how you choose to upgrade it throughout the game.

Some members of your clan will be with you from the beginning, and others will join you as you travel through the fens and villages of East Anglia – depending on the choices you make in the story, of course. When it comes to raiding, some will be standout warriors, some you will need to help carry cargo, and some things Eivor can only do alone. Happily, Pietri confirmed that the cat we saw in the demo, that Eivor offers to adopt, can go and live in your settlement. One small but impactful decision for the aspiring assassin is the addition of a ration system. Instead of just regenerating health automatically, Eivor will need to collect mushrooms and berries in order to heal in battle. This was changed to reflect the idea of being a stranger surviving in a new land, and the Viking as a proactive warrior – it’s yet another example of how Ubisoft Montreal is trying to filter the setting out through the wider narrative, systems, and mechanics.

“A Viking is not someone that’s gonna wait to have their life regenerate. So we wanted to make it a bit more action-driven,” says Pietri. “It’s an active choice that you’re going to do at a specific moment. We love the idea that battlefields are a bit tenser. So you have to find the right moment. You have to pay attention to that. And it’s something that brings a lot of tension to the action.”

From cats to mushroom dinners to settlements, Assassin’s Creed Valhalla will be very different from previous games, and ultimately, that’s because by playing as the Vikings, you’ll take on a new role in the series. “Almost every other hero in Assassin’s Creed –  or even in RPGs, in general – you tend to be a hero, who is of that place belongs in that culture, and, and has a natural tendency to just want to wander around and help people,” explains McDevitt